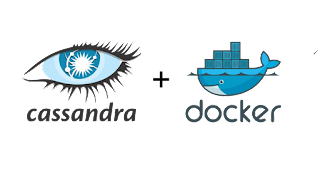 The problem: We have an application that uses Cassandra as the preferred persistence technology and we would like to have a one-command container running for local development and testing.

In other words, we need the Cassandra container to have the Keyspace and the up-to-date schema following our migration scripts by executing something like  ./run_containerised_cassandra_locally.sh
Breaking this problem into two sub-problems we identify that in order to do that we need a DB migration tool. In RDBMS we have tools like Flyway or Liquibase. For Cassandra, with a little bit of digging, com.hhandoko:cassandra-migration can be found. Which we can be incorporated into our codebase as a dependency or can exist as a standalone artefact (jar file) to be run on demand by a script. The latest is what we are going to use here.
When we go to releases of that repo, we can see the version of the jar with dependencies. (Current versioncassandra-migration-0.17-jar-with-dependencies.jar).

We want to create a structure like the following:

Under schema_migration we place another directory which will hold our migration scripts. The naming should be like the one in the screenshot. Starting with V1__ (mind the double underscore) and a description of the script it contains.


Now if we want to run the schema migration we need to call the java jar file with some parameters. For the shake of convenience, we introduce the script run.sh that you can see on the screenshot above.

We need to make it runnable with chmod +x run.sh.

And finally, before we run it, we need to export the variables that are passed as system variables to the migration utility. (For local development that there are no really sensitive values We can keep a file with the commands that we will source to our environment, example to follow.

As a bonus, because We are using the migration job as part of our pipeline, we have containerized the migration utility so we can easily use it on Jenkins. You don't have to do the next part if you only want this for the local testing/development container.


Now we are ready to create the Cassandra container with our stuff :D 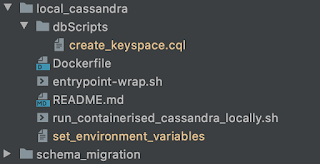 Now, we are in the local_cassandra directory of the above screenshot. In the dbScripts directory, we just add a simple cql command that will be used to create the keyspace once Cassandra is up and running.


On line 3 we copy a file with all variables that the migration script will need. Since we do not have sensitive secrets for the local env we just have the following.


On line 4 we copy the intermediate script on the container. I call it intermediate because it will run before the real entry point. It is like a wrapper. It is a modified version of a script that we found on StackOverflow script (source).


It is definitely an interesting one. Let's analyse its functionality.
On line 5 we source the above file so it can export the variable we set earlier for the migration script. This will make use of the schema name value.
Then it will loop and wait for 2 seconds until the creation of the keyspace will return successfully when it will, it will also create a flag file in /tmp/cassandra_up.flag folder that we will use to make sure that Cassandra is up and the keyspace has been created. This file will trigger the schema migration process in the script run_containerised_cassandra_locally.sh.  The & at the end of the line 13 makes the above block of code run asynchronously on the background.

On line 16 we proceed with the real docker entry point passing all the arguments that were initially passed on this script on the Dockerfile.

Finally, our script that will orchestrate all the above and create the Cassandra container.


Lines 3-5 clean up the already existing Cassandra containers with the name localCassandra so we won't have any conflicts.

Lines 7-8 are running the container.

Lines 14 -18 are waiting for the flag file to be created. This will determine when the container is ready for the next step.

Finally the Cassandra migration utility (jar) after we source the variables once again.

Don't forget to make it executable!

Now we can have a Cassandra container with our schema and everything just by running
./run_containerised_cassandra_locally.sh
cassandra docker

Popular posts from this blog

[Video] OOD Guided by Memes, the fun on being SOLID 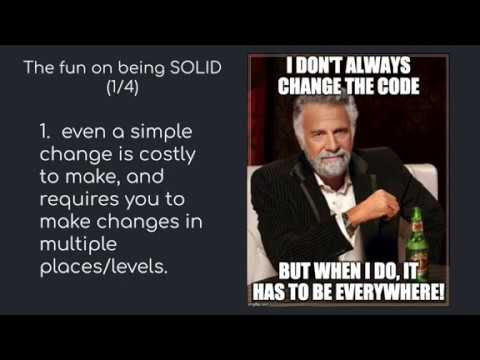 This is a presentation I made for my colleagues on SOLID principles and clean code. After some positive feedback I decided to record it. Constructive feedback is more than welcome :)
Read more

How to test file operations with Junit5 TempDir

February 29, 2020
In Junit4 we had TemporaryFolder. In Junit5 the way to test objects that are interacting with the file system it is pretty straightforward with the use of @TempDir. To make things easier to understand lets assume that we have a class that reads all the files, directories, sub directories and files in sub directories and gathers information about them in a form of a simple dto that contains the extension, if it is directory, the absolute path etc. and adds them in a list. So given a Path you get a list of objects that contain the file information. In order to test this functionality we are going to use the TempDir helper from Junit5. This will create a temporary directory in our filesystem that will be cleaned automatically when our testing is finished. Check out the example bellow Check on line 20 how we pass the temporary directory as a test parameter annotated accordingly. @TempDir will create a directory (depending on your OS) on a tmp folder like /tmp/junit6110933399026626368, but
Read more